While government overreach from the IRS and NSA garner national headlines, additional forms of government overreach are appearing as people learn more about Common Core educational standards. In Florida, parents freaked when they found out that an Iris Scanning Program had been put in place to keep track of their child’s bus commute. The scans were implemented at three schools in Polka County, Fla.(1) The program was initially meant to increase security for children to make parents feel safer, but since the parents in question were (mistakenly) never informed the program only caused panic.

Like the Iris Scanning Program, the Common Core State Standards Initiative (CCSS) purports to protect and further the education available to children from preschool through to the workforce. What the organizations behind Common Core aren’t addressing are the legitimate concerns about federal mandated educational standards, the cost incurred by states, the intricate database system, or a host of other issues. The Department of Education has proposed an extensive database that collects every homework assignment and assessment for academic consideration. Future areas of exploration in this database system include: monitoring emotional reactions via facial recognition cameras, pressure-reading computer mice, and even posture analysis seats.(2) 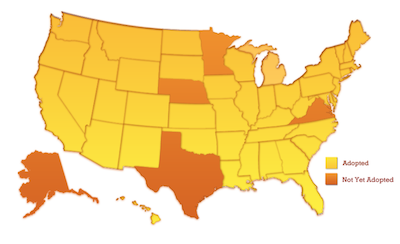 Click your state to find out when Common Core will be fully implemented.

According to the Common Core State Standards Initiative website, “[they] provide a consistent, clear understanding of what students are expected to learn, so teachers and parents know what they need to do to help them.” (3) Common Core encompasses a series of moderate academic standards that are monitored through new standardized testing made available to students, parents, teachers, and the state. States commit to these standards and assessments. Promising to extend their databases to include more comprehensive data that will track students from Kindergarten to the workforce, states are pursuing a form of tracking that is unparalleled in the history of American education.

What many people don’t realize is that CCSS is in its final stages of implementation. Initially introduced in 2008, Common Core has undergone a series of revisions supplemented by The Race to the Top Fund, a program that was allotted $4.35 billion dollars nation-wide on the condition that states accept the program wholesale. The first two states didn’t even look at the standards before they pledged to follow them. Early in 2009, when CCSS was officially launched, 48 states signed a memorandum pledging to implement the standards in their public schools. (4)

Before Common Core can be fully implemented the state legislatures need to approve its funding. By the end of 2010, forty-five of the forty-eight States approved Common Core. (5) Currently, several states are aiming for full implementation during the 2013-2014 school year. In the 2014 – 2015 school year States will begin to administer the new assessments.

This Probably Affects You.

It’s easy to look at the incident in Florida and think that nothing that drastic could happen in little, old fill-in-your-district. But these nation-wide standards aren’t just affecting Florida specifically, or a small handful of states. 48 states accepted the program initially. Of those forty-eight, 45 states have already officially approved the standards and are implementing them in less than 5 months.

This is not a distant-future event, nor is it localized in a few states. Common Core is becoming a hard and fast reality that permeates throughout the entire U.S.

The best way to get involved is to join the conversation and spread the word. Follow us on Twitter and check out our sources below and stay tuned for more updates on the implications of Common Core.

(2) Promoting Grit, Tenacity, and Perseverance: Critical Factors for Success in the 21st Century

(3) Controlling Education from the Top: Why Common Core is Bad for America

(5) Common Core in the States