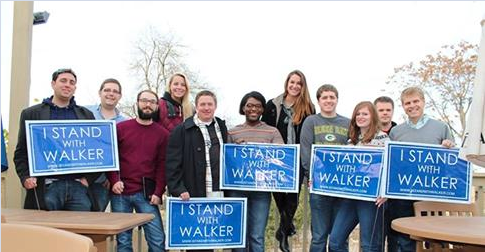 November 1, 2014 ”” American Majority Action (AMA) has made a significant impact in key Wisconsin races with a strong ground-game. AMA and their volunteers have targeted self-described “undecided” voters and made a pitch to them to Keep Wisconsin heading in the right direction. Over the final weeks of the campaign, AMA has focused on mobilizing conservative voters during their Get out the Vote phase.

Matt Batzel, Wisconsin State Director of American Majority Action, said, “Doors are the gold standard of campaign tactics. Wisconsinites have been inundated with TV commercials and radio ads, robocalls and campaign mail pieces.  While much attention is paid to the spending on the airwaves, those touches have fleeting impact.  But a personal contact with a friendly face at their door makes a lasting impression. We have found great reception on the doors to our message of the need to keep Wisconsin heading in the right direction.”

Over 100 volunteers and staff are using the latest campaign technology, Voter Gravity, which helps them to more efficiently get out the vote through micro-targeting voters. They are working in critical areas of the state including Sheboygan, Milwaukee, Ozaukee, Marathon, Waushara, Iowa, Winnebago, and Monroe Counties.  The outcome of the election could be determined in these key counties where door knocks have exceeded 50,000 contacts.

In addition to Wisconsin, AMA is also targeting US Senate and House races in Iowa and New Hampshire.

American Majority Action is a conservative organization dedicated to engaging citizens in the political process by mobilizing them in support of candidates who favor limited government, individual freedom and protecting the free market. AMA is founded on the belief that citizen engagement at the local, state and Federal levels will foster needed systemic change to preserve the American dream. American Majority Action coined the term “I Stand with Walker” during the 2011 protests in Madison and has been active in 2010, 2011, 2012, and 2014 elections in Wisconsin.  Find out more atwww.americanmajorityaction.org