American Majority Action’s efforts in Wisconsin did not go unnoticed. We’re proud of Nate Nelson, Matt Batzel, and all of the other staff’s fine work in Wisconsin during the Spring 2019 election. Below are some highlights from the media’s coverage.

The Capital Times: Brian Hagedorn declares victory: What that means for the Wisconsin Supreme Court and its next election

“Hagedorn, who trailed in fundraising throughout the race and saw two key Republican groups pull their endorsements of him, was boosted by late donations and canvassing from several outside conservative groups that mobilized their base. Americans for Prosperity said it knocked on 40,000 doors and American Majority Action said it knocked on 15,000 doors… If Hagedorn’s votes hold, it means that conservatives maintain a strong majority on the court at 5-2, for at least four years.”

“Numerous organizations withstood the onslaught of negative ads, false media narratives, and political dog whistles to support Hagedorn, even when others abandoned him. The Wisconsin Realtors Association, typically a reliable ally of conservatives in statewide contests, rescinded its endorsement and demanded a return of $18,000 in contributions amid the attacks. The National Chamber of Commerce, another key backer of conservatives in past Supreme Court races, declared in turn that it was sitting this one out. Thankfully, groups such as American Majority, Americans for Prosperity, Pro-Life Wisconsin, Wisconsin Right to Life, and the Wisconsin Family Council stood with Hagedorn.”

“Winner:  Americans for Prosperity, American Majority, RSLC. While all the big-name center right organizations wrote Hagedorn off, these three scrappy groups did the hard work of freedom and delivered an upset victory.”

“They also had a ton of very motivated grassroots support…Conservative grassroots groups like American Majority Action…These guys were on the ground and in areas where they worked on the ground were the same areas that had the biggest swings from ‘18 to ‘19.” 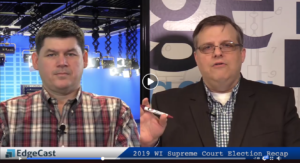 Some groups stepped up big time & deserve a thank you:

Oh and forgot to give huge credit to @AMAction, @MattBatzel and team; they knocked on thousands of doors; mobilized thousands of voters and deservedly should take a major victory lap for this win! #SCOWIS #wiright https://t.co/YJHILbYM7y

Let’s be clear – several groups deserve an immense amount of credit for sticking with @judgehagedorn when others completely abandoned him – @wisgop @AFPWI @AMA_WI @RSLC Judicial Fairness Initiative. Power of grassroots should never be underestimated! #SCOWIS https://t.co/v9vbUNiUop