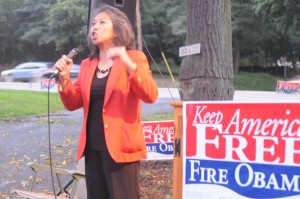 With the race for the White House getting tighter and Pennsylvania poised to play an important role in determining the outcome of this year’s election, national conservative organization American Majority Action (AMA) has opened its second Liberty Headquarters in Chester County in suburban Philadelphia.  The Southeastern Pennsylvania Liberty Headquarters will be a hub of Get-Out-the-Vote activity in critical bellwether Bucks, Chester, Delaware, and Montgomery Counties as well as other target areas throughout the eastern half of the state.  The effort follows AMA’s successful Pennsylvania GOTV effort coordinated in 2010 in partnership with local tea party groups. .

“These counties in the Philadelphia area are some of the most vote-rich in the state for fiscal conservatives.  Pennsylvanians defeated borrow, tax and spend liberals like Joe Sestak in 2010.  Now the Keystone State can do it again,” states Ned Ryun, President of American Majority Action.  “This center will provide a range of resources and information to ensure voters in these key counties are educated about the issues and get out to the polls to ensure Barack Obama is denied a second term.”

A recent poll conducted by Franklin and Marshall College showed a majority of Pennsylvanians believe the country is on the wrong track leaving President Obama clearly vulnerable in the state, only edging Governor Mitt Romney by a margin of 47%-42%.

American Majority Action’s SE Pennsylvania Liberty Headquarters will serve as a central nerve center for conservative volunteers throughout the region to conduct voter targeting, outreach, advocacy and get-out-the-vote (GOTV) activities from now until November 6th.  Staff and volunteers will educate voters on critical issues from Obamacare, to our massive budget deficit and the mounting threat our federal government poses to our constitutional freedoms.

Through the AMA Liberty Headquarters, local grassroots groups will also have access to the latest technology and receive personalized access to the Gravity get-out-the-vote system, which will allow activists to participate in grassroots activities in their local communities.

Local tea party organizations and other volunteers will receive the resources and guidance necessary to effectively boost turnout among fiscal conservatives this fall.  “With effective messaging and organization Pennsylvanians can have a profound impact on the direction of this nation,” states Ryun.  “Moving the needle even a little in these key counties in favor of limited government and more freedom can make a significant difference.”