Since when does an increase in demand for a product ever make it more affordable?

Well, in the world of Governor Romney and President Obama it does–but that’s not the world young Americans are living in.

During last night’s debate, both the president and Mitt Romney zeroed in on the student loan issue and promised to make college more affordable for all Americans. How? Easy access to student loan aid.

As a recent 2012 graduate with an economics degree, I don’t buy it. Not only have I seen my personal tuition increase each consecutive year of college, but also my friends’ tuition at colleges and universities across the country. College may be easy to attend, but it sure ain’t affordable.

Anyone who has taken Economics 101 knows that an increase in demand for limited resources inevitably increases the price. It’s a fact of life.

This is what we are seeing happen with higher education. Big government has artificially increased the demand for college by convincing people that it is a necessity–and providing billions in subsidies. By providing easy loans, more students are attending college while the amount of resources for higher education are increasing at a much slower pace.

To provide for the influx of new students, colleges have to build more dorms, provide more food, increase the amount of facilities, and hire more teachers (or pay them higher salaries). This takes time and it isn’t cheap. This is exactly why we have seen tuition increase 368 percent in the last three decades.

In fact, tuition has increased 25 percent under president Obama alone. According to The College Board, public four-year tuition for the school year 2011-2012 is $8,244, up from $6,585 in 2008-2009. Add in room and board, costs have increased 20 percent since the beginning of president Obama’s term. Private four-year colleges are also up 13 percent. 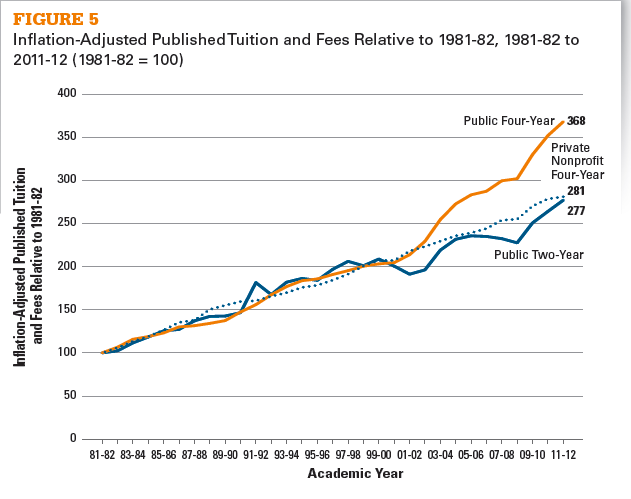 Rather than focusing on the positive correlation between easy loans and increase in the price of college, Mitt Romney only focused on providing post-college jobs in last nights debate. As one of the lucky students that found a job after graduation this past May, I wish Mitt Romney would have addressed both issues equally. About 10 percent of my annual salary goes towards paying off my student loans. After paying for gas, food, rent, and utility bills I hardly have any money left to put into savings. This isn’t affordable living nor the American Dream–this is scraping to get by.

And many graduates–especially the 53 percent that are unemployed or underemployed–aren’t making ends meet at all. Student loan default rates are at a three-year high of 13.4 percent. If a President Obama or a President Romney continues to encourage fiscal irresponsibility, we will only see these numbers continue to rise.

Government control of an industry will never make the product cheaper. We need a leader that will make the tough decision give the student loan industry back to the private sector where the natural demand for college meets the adequate resources available. We need a leader that will encourage fiscal responsibility rather than out of control spending. Only under these circumstances will we see college become more affordable.