Romney Will Win Debate if He Brings Up Youth Misery 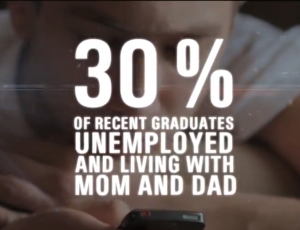 No demographic has suffered more under President Obama than young Americans””especially recent graduates.

The Left always parades supposed “victims” of free enterprise when it attacks conservatives. It’s time for Romney to flip the coin and attack Obama with the victims of his polices.

Even if Obama blames the economy on Bush, here are three big ways Obama’s new laws have made things worse for young people:

No one should buy the “blame Bush” argument””it’s been almost four years! So here are three big reasons young Americans are economically worse off:

Obama’s rhetorical devices are proven null and void in the face of facts, and if Romney decides to use these facts tonight, Obama doesn’t stand a chance. Using these points won’t just help Romney with young people. They will help Romney show he is in touch with Americans who are miserable””not just with those who are well off. After his 47 percent remark, it will help. Romney should make youth issues the face of his arguments.

Obama’s policies are currently ruining our lives, and his spending is ruining our future.