Thank you to all of our volunteers and staff who knocked on doors and turned out the conservative vote needed to win around the country last week! These races were won on the ground and every single voter contact was critical to sending a strong message to Washington that we need to change course. 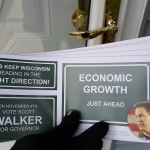 At American Majority Action, we focused our resources on the most effective way to change voters’ minds in politics: via door-to-door contacts with targeted voters. We knocked on doors in Wisconsin, Iowa, and New Hampshire and are proud of our work in US Senate races, U.S. House races, the Wisconsin gubernatorial race, and key state legislative races.

Our team knocked on over 66,000 doors and distributed over 80,000 pieces of literature

to target conservative voters and turn them out to vote. We saw a significant impact. For instance, in Marathon County Wisconsin, we knocked on over 5,000 doors and saw Gov. Walker’s vote increase by 17.5 percent over what he received there in his 2010 election. Walker’s six-point win sends a strong message that voters will reward bold conservative reforms.

We are thrilled to have played a role in helping send quality conservatives to Congress: Senator-elect Joni Ernst (Iowa), Congressman-elect Glenn Grothman (WI-6), and Congressman-elect Rob Blum (IA-1). In the state legislative races, nine of our 11 candidates won their races in competitive districts.

It is satisfying to see our hard work of door knocking since August has paid off, but this is only the beginning. We must continue to hold our elected officials accountable and build on our gains in 2016.