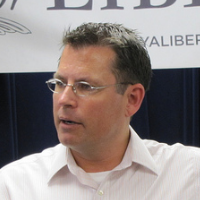 Matt Robbins is the National Executive Director for American Majority.

Previously, Matt was the political director for the California Republican Party. He has also served as a Coalitions director on McCain-Palin 2008 and as the Director of Training at the Leadership Institute.  Additionally, Matt has worked as a “friendly-fire” analyst in the Office of the Secretary of Defense at the Pentagon, as campaign staff on Bush-Cheney 2004, and in both state-level races and state government.

Matt has personally trained thousands of political activists nationwide and in several foreign countries on campaign management, communications and party and candidate development.

A former high-school teacher, Matt is an Arkansas native with a degree in English from Pepperdine University in Malibu, California.