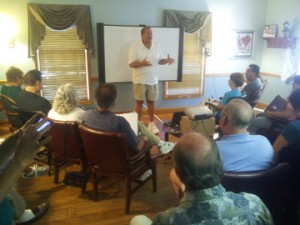 At American Majority Action we believe that with billions of dollars””projected to be $5.8 billion by a recent independent analysis””to be spent on political campaigning such as television ads between now and Election Day, the importance of person-to-person, neighbor-to-neighbor campaigning takes on greater importance with each passing day. Simply put, voters will increasingly tune out political ads as we get closer to Election Day, as the sheer volume of these ads explode beyond imagination.

Trust-based relationships (family, friends, neighbors, etc.) will matter more than ever as voters decide who they’re going to believe. The best scientific evidence suggests that person-to-person, neighbor-to-neighbor, door-to-door campaigning””followed closely by volunteer phone calling””is the single most effective means to et marginal, swing voters out to support your candidate of choice. Unfortunately, the left and organized labor have understood this much better than those of us who believe in limited government and individual liberty.

With this in mind, AMA hosted two Get-Out-the-Vote (GOTV) trainings in Pennsylvania this past Saturday in the Pittsburgh and Philadelphia areas. We sought to honor the Constitution on its 225th anniversary by giving ordinary citizens a vision of how to make a maximum grassroots impact this year.

We were thrilled to have nationally-known speaker and author Chuck Piola, known in business circles as the ‘King of Cold Calls,’ train volunteers at the Philadelphia-area event. Chuck spoke about the secrets of cold calling and overcoming the communication barriers we face when voters opens their doors or answers their phones (and are doing everything they can to get back to their favorite TV show or their load of laundry). Here’s some very helpful observations Chuck shared with us:

This report was brought to you by: Martin Gillespie, American Majority Action Executive Director.

For information on how to get involved, contact Martin at Martin@am-action.org or check out American Majority Action’s Liberty Headquarters.